Whiskey: A Taste of Scotland

Whether you are a whisky drinker or a wine aficionado, a whisky “tour “ of Scotland is informative, fun and satisfying – taking you from the Lowlands to the Highlands to see the best scenery and attractions to be found in this country of friendly people.

There are official whisky tours from packaged plans to custom and self-guided ones. While packaged plans are suitable for the less adventurous sort, for those of us who like to have the freedom to explore, getting together with one’s favourite travel professional to fine tune a custom tour is the preferred way to go.

So why is this type of themed tour one of the better ways to see Scotland?

First a wee bit of history and information on the famous drink. The Exchequer Rolls of Scotland first mention the brewing of aqua vitae from malt in 1495 which suggests it was being made before this time. Note this quaint name translates into the Gaelic uisge beatha as whisky is also known. Legalized whisky production in licensed breweries came into its own in the 19th century with advancements in the distillation process further stimulated by a disastrous beetle infestation of the wine growing regions in France at that time. Before then, taxation had led to an overwhelming prevalence of illegal breweries.

Today the Scottish Whisky Regulations define what may be legally sold as scotch whisky from production to labeling and advertising. Whisky is enjoyed world –wide in over two hundred countries. It is very important that the Scotch whisky remains “true” to its name.

Is All Whiskey the Same?

There are different forms of whisky but all start as malted barley, water and yeast which is distilled in large copper vats and matured a minimum of three years in oaken barrels. A single “malt” is made entirely at the one brewery but a blended “malt” may be the combination of that produced at two or more breweries. Most whiskies are blended, and mostly blended with grain whisky. Grain whisky has unmalted barley and other cereals such as wheat in the distillation process. The distillation of a grain whisky also requires a different still to the traditional copper vat.

The water in different parts of Scotland varies greatly in taste depending on what it flows through , for example, water which flows through peat would have a peaty taste peculiar to that area. With the varying flavours of the water plus the innumerable choices of single malts plus the individual grain whisky, the blending choices are innumerable. And when a brewery happens upon a viable commercial combination, that blend becomes its trademark to success and its closely-held secret.

So back to the tour! There are five whisky regions : the Highlands ( 41 distilleries), the Lowlands ( 13 distilleries), Campbelltown ( 3 distilleries), Islay ( 8 distilleries) and Speyside ( 50 distilleries). As you can see these cover the depth and breadth of the country, and most breweries have premise tours where you can learn about the process and taste the product. Combine your distillery visits with local attractions of which there are many, the historical sites nearby , and the breath-taking scenery. A great introduction and guide to study before planning your visit would be VisitScotland.

A good time for a brewery tour of the country is the month of May which is when Scotland celebrates this drink all month long with festivals, gatherings, tastings and more. May can be warm and the countryside abounds with spring foliage and flowers as well.

A few words of caution: if you are on a custom tour that involves driving your own rental car, remember that driving is on the left, often comes with a stick shift in a smaller car, involves windy, very narrow roads where the lorries(trucks) you meet are full size and the odd sheep or two regular size, don’t imbibe too much whisky if you are driving! There are trains and buses for custom jaunts as well as the packaged tours as options – it’s all elements which you can discuss with your travel professional as you plan your Scotland whisky tour. 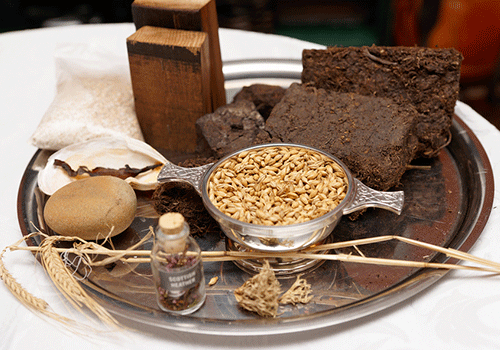 Many different elements combine to make a unique whiskey – from the peaty water to the grains used. 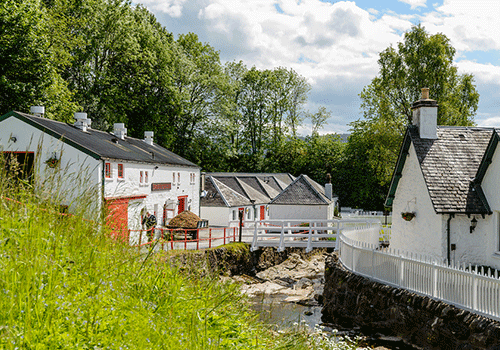 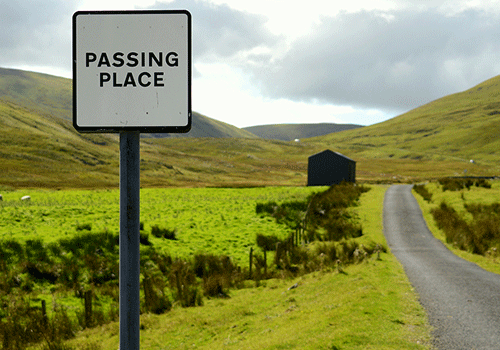 At least this Scottish road is straight with no wandering sheep or looming lorries !